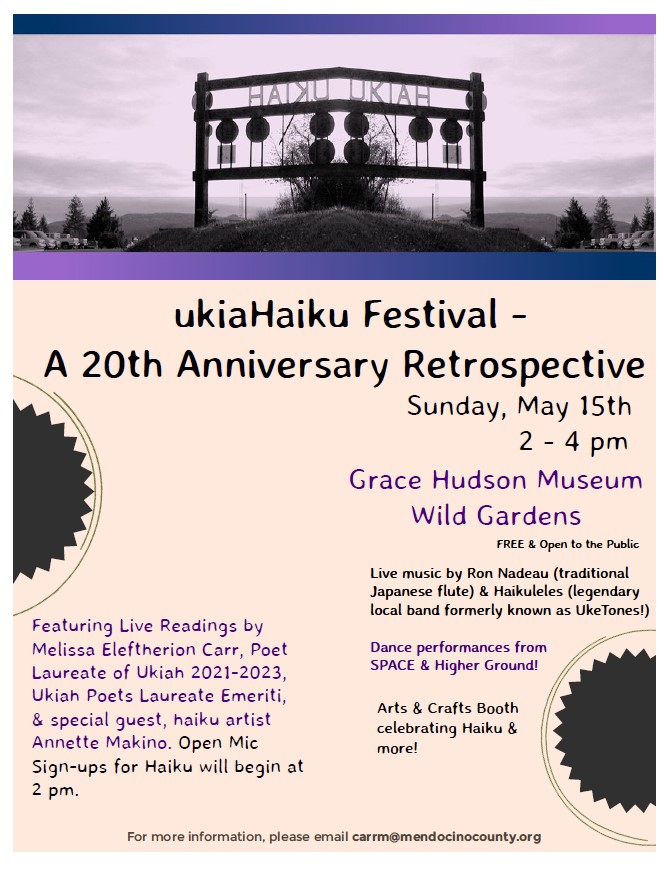 In 2002, a group of poets and poetry lovers in Ukiah, noting that their city’s name was “haiku” spelled backwards, decided to hold a festival. Starting with Armand Brint, Ukiah’s first Poet Laureate, as its guiding spirit, the festival grew and flourished throughout the years, becoming internationally known. Now the event returns, in time for its 20-year anniversary, in an in-person celebration on Sunday, May 15, from 2 to 4 p.m., in the Public Room and Wild Gardens at the Grace Hudson Museum.

The ukiaHaiku Festival was in quarantine the first year of the pandemic and appeared only in virtual form the year after, but haiku itself and its many writers and fans emerged intact. As people picked themselves up and dusted themselves off from the strains and separations of the COVID-19 pandemic era, this new form of the ukiaHaiku Fest was dreamed up. The organizers decided not to hold a contest this year, but to treat the event as a retrospective celebration, with former and current Poets Laureate reading their favorite selections from both adult and youth categories, as well as adding one of their own. An open mic reading will follow, with sign-ups starting at 2 p.m. (Children and young adults are invited to attend and read, and bilingual haiku is welcome.) Shakuhachi flute, an ancient Japanese musical form, will be performed by Ron Nadeau. Entertainment from SPACE, Higher Ground, and the Haikuleles (AKA the Uke Tones) will be provided. An arts & crafts booth, a special presentation by award-winning haiku poet and artist Annette Makino, and energetic MCing from former Poet Laureate Michael Riedell completes the picture.

The late and much-loved Susan Sparrow, a key organizer of earlier UkiaHaiku Fests and other local literary events, saw the festival as “uniquely Ukiahan.” Brint, also an award-winning haiku poet, comments: “In many ways, this 20th anniversary celebration is a tribute to internationally acclaimed haiku author and Mendocino Coast resident Jane Reichhold (1937-2016). Jane served as an unofficial mentor to the festival, and also judged the International category of haiku submissions. It’s thanks to Jane that local organizers, judges and many participants learned the finer points of haiku.”

A haiku is a three-line poem that captures a fleeting moment and a quiet impression which can often go unremarked on in our busy lives. The poems resemble little word blossoms, compact and bursting with life. Originating in Japan, haiku draw attention to the passing seasons and to everyday human encounters without comment or embellishment. “Think of it as a mental snapshot, as seeing the haiku moment in your mind,” Dan Barth, another former Poet Laureate of Ukiah, explains. Traditionally written in a 17-syllable format of 5-7-5, the haiku form has been stretched and reinterpreted in recent times as it enters new countries, languages, and situations.

Masking and social distancing at this event is recommended. Part of the Festival will be held outside to facilitate this.

The 20th anniversary ukiaHaiku Fest is sponsored by the City of Ukiah.

This calendar lists poetry-related events in Mendocino County and beyond, including radio programs, featured readings, open mics, and more.

For more information, see the event details and organizer and venue information at the bottom of each event.

Copyright 2022 Theresa Whitehill, All Rights Reserved
Back To Top