A California poet, letterpress printer, and graphic designer, Theresa Whitehill served her local community as Poet Laureate for the northern California city of Ukiah from 2009 through 2011 and has been involved her entire career in the production of poetry readings and literary events. Her poetry and letterpress broadsides, many of which are produced with her husband, artist Paulo Ferreira, are in the collections of the Getty Center for the Arts, the John Hay Library of Brown University, the Bancroft Library at UC Berkeley, Mills College, and Stanford University’s Special Collections Library.

Born and raised in California, she attended UC Santa Cruz and Mills College in the late 1970s and early 80s, studying natural sciences, Spanish, English, and book arts. Since 1984, she has lived in Mendocino County in northern California, where she is well-known to local poetry audiences through her readings on public radio and local venues.

In 1997, she served as Poet-in-Residence for Stags’ Leap Winery in the Napa Valley. “Évora a Doce,” her poem about Portuguese soul and food, was published by Alice Waters in 1998 as a letterpress broadside designed by Richard Seibert. A collaboration with chef and author Shannon Hughes has resulted in a series of culinary poetry events between 2000 and 2003, blending Whitehill’s writing and performance with Hughes’ soulful food and menu concepts. She is a co-founder of Watershed Poetry Mendocino, a sibling to the Berkeley Watershed Poetry Festival.

Whitehill’s collections of poetry include A Grammar of Longing (2009) and A Natural History of Mill Towns (1993), published by Pygmy Forest Press; Saudades, published by Stags’ Leap Winery in 2003; and the anthology, Deep Valley: Poets Laureate of Ukiah 2001–2018, published by Slow Mountain Press in 2017. She spends her time between her studios in Ukiah and St. Helena, California, managing her commercial graphic design business, Colored Horse Studios. 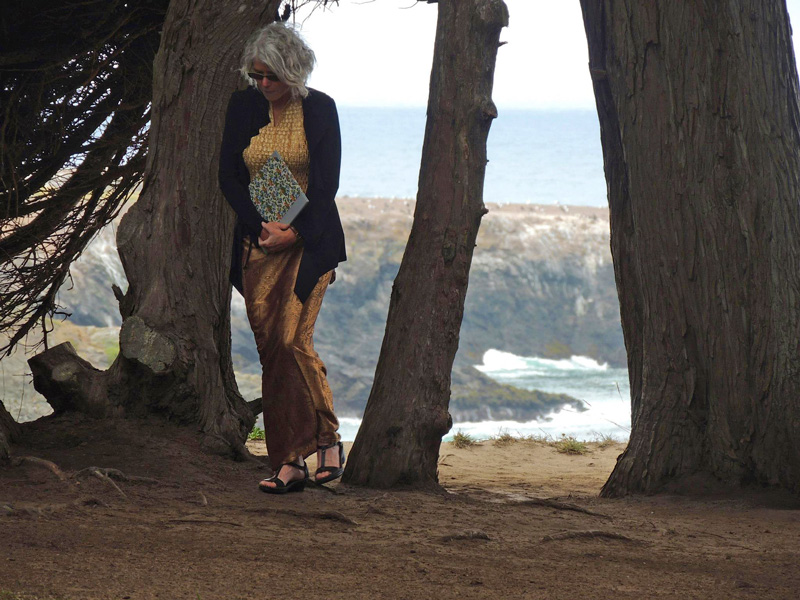 Theresa Whitehill on the Mendocino headlands; photo courtesy of the Mendocino Music Festival for which she was participating in a reading of haiku, 2013

Copyright 2023 Theresa Whitehill, All Rights Reserved
Back To Top